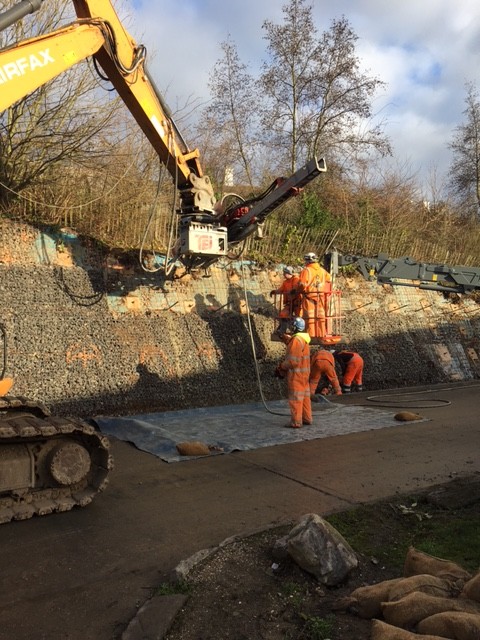 Condor were engaged by F M Conway to rectify a failed bank to the site boundary embankment. An interesting challenge, where an area 200m long of previously stabilised Bank covered by a stone facing had failed. Upon commencing the work and attempting to drill through the existing facing it transpired that the area had been previously had mechanical anchors installed that were failing and also obstructing the bank thereby obstructing the locations for the designed solution.

To compound the problem the previous anchors had been installed in a haphazard manner following no pattern and were of different diameter and head plates size. Further no as-built drawings were available from the original construction. 3 major issues arose:

2. Reduced ground resistance: The clay subsoil was previously buried behind the stone baskets, thus preventing exposure to the atmosphere and subsequent softening. Now, the clay would be directly exposed to the atmosphere and rainfall, this will lead over time to a reduction in the effective strength of the clay. Therefore, the resistance available from the ground had reduced, requiring more work from the soil nail reinforcement.

3. Reduced slope support: The stone-filled baskets were previously providing some support to the ground and this was assumed to continue for the purpose of the design. Once these had been removed, there was a loss of this support.

Therefore a quick solution had to be found as the bank was continuing to slip. As a result the stone facing would have to be removed in stages in its entirety. The removal of the stone facing effectively weakened the strength of the original soil nails that were to be installed and therefore additional nails were required to counter this as referred to above. The result was 305 more anchors were required and the meterage increased by 20%. The removal of the stone had to be carefully managed as without stage removal there would be a huge safety risk for the stability of the Bank particularly as the work would cross over a shutdown during the Christmas period.
The nails were installed using our TEI 550 Drill Rig from a 22 tonne excavator and bars were added using our own Skyjack TK46 mobile boom.