Condor projects were commissioned by P2ML to install rock anchors around the bases of a telecom mast on the Scottish Island of Barra. The project consisted of 28mm solid steel rock anchors been drilled and installed with resin into the rock. The anchors were then attached to 12mm thick RSA to link each anchor across the base plate of the mast creating a simple strap. The anchors were subjected to proof testing pull tests with loads of 256Kn been applied. 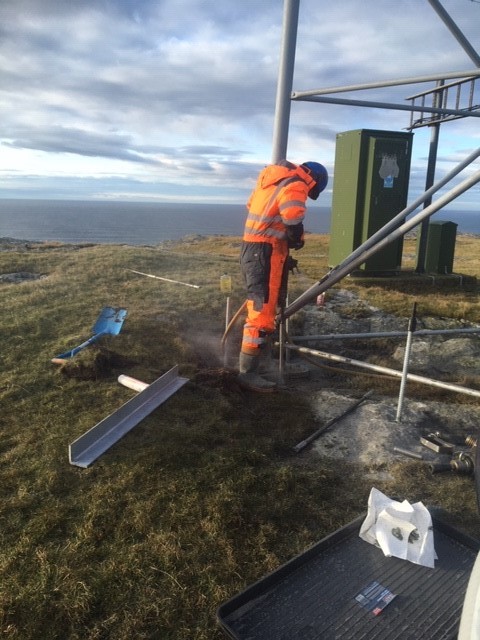 The main challenge for the project was the location of the island due to it being a 5-hour ferry crossing. If anything failed or broke down there was no way of replacing it without substantial loss of time. We left nothing to chance taking almost 2 of everything just to be on the safe side of Murphy’s Law. We had heard that the rock on Barra was harder than a goat’s knee and we were not disappointed. We used Holman 303 rock drills to create the boreholes for the anchors with tungsten carbide button drill bits. Minova lokset resin capsules were then placed down the bore and mixed within the hole by attaching to a turmag drill.

A test anchor was installed in close proximity to the anchor bases to check the bond and the strength of the rock. The anchor was pulled to 256kn way above the anchors working load proving that the material, depth, and resin were all right for the project. Once the test anchor had passed all the other anchors were installed in exactly the same manner as the test anchor. We then did further testing on the anchors around each base and post tensioned the anchors onto the steel strapping holding the mast down for many more years and Atlantic storms to come. The project was completed in 3 days and apart from the gale force winds, it was one of the more enjoyable projects that we have undertaken, with spectacular views across Barra and the Outer Hebrides.