In July 2018 the main contractor, Ringway, working a collapsed wall, called on the expertise and rapid response of Condor Projects Ltd to make access, clean the remained of the wall, mesh and shotcrete the surface to provide a temporary repair, allowing the road to be opened in the shortest possible time.

Following a heavy and cold winter, a part of the A59 at Kex Gill, the main route between Harrogate and Skipton sustained a partial collapse of the retaining wall. This caused the road surface to slump up to 300 mm, requiring the road to be closed to all traffic.

From the notification, the work was completed in 7 days, working continuously. After a period of 5 days to allow the concrete to gain strength, the road will be partially reopened under the control of traffic lights.

A permanent solution was completed by Condor Projects Ltd, but this was its own challenge as the working zone was between live traffic and an SSSI site, limiting access to the face of the wall.

In November 2018 work continued on the job in order to achieve a permanent solution. So far, this had been a challenging start to a difficult project due to the access restraints and location. At the time, Condor Projects were the only company in the UK willing to take on this challenge.

Condor projects came up with a design that allowed the A59 to remain open to traffic throughout the project. Soil nails will be drilled into the existing retaining wall to a depth of 12m using our Husqvarna/Marini drilling rig. 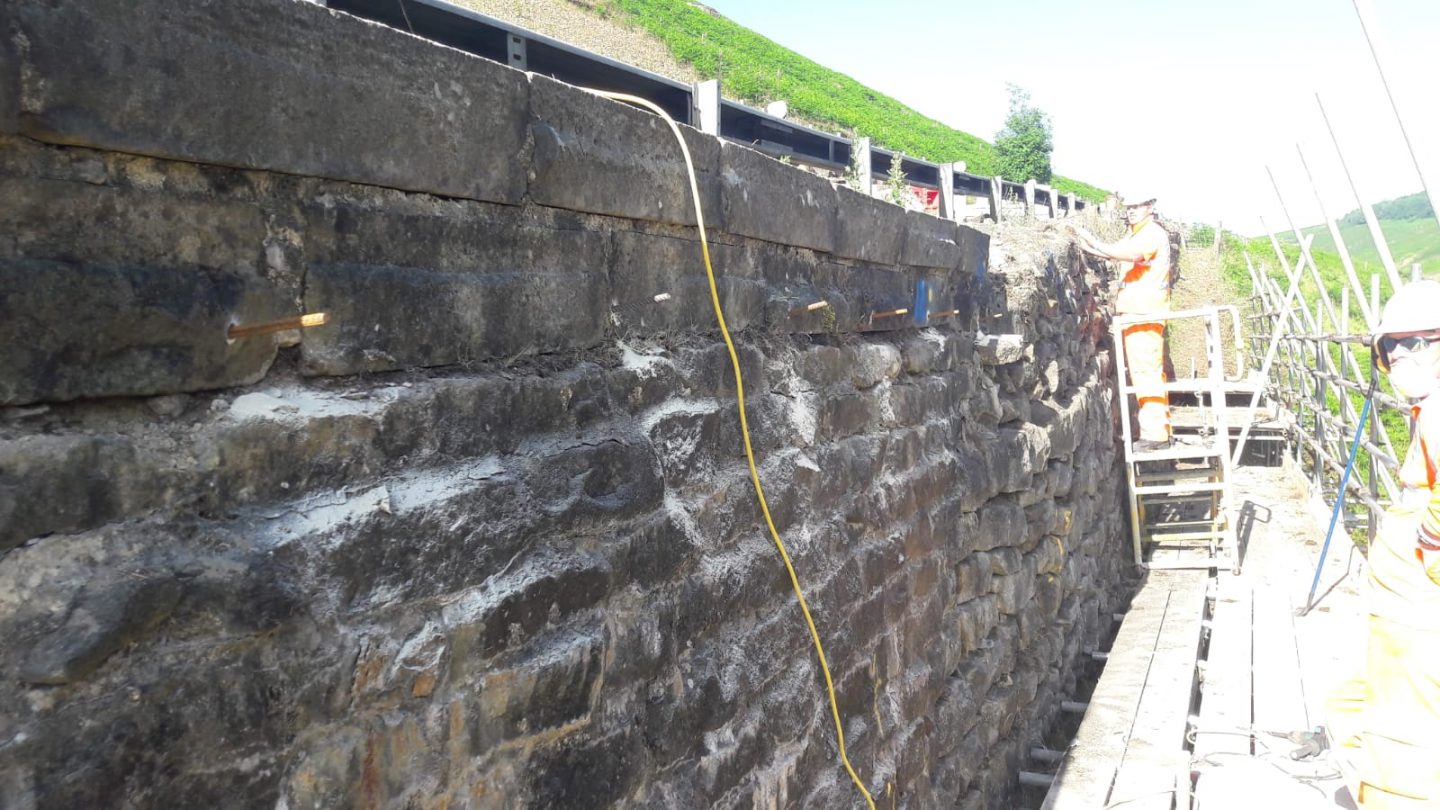 Work continued on the project working through the winter and into the new year. In February work was progressing well. The main area of drilling had been completed in very difficult conditions due to the location of the worksite. In the first week, every anchor that had been installed was subject to a pull test by an independent testing company, as requested by the client.

The result of the pull test proved that every anchor had been installed correctly as per the geotechnical design.

Work continued on an extension to the working area that has the possibility to move. The extended works anchors were installed to a depth of 12m using our Husqvarna DXR310 with a Marini drill mast.

The drilling element of the project was now completed at Kex Gill. 51 anchors had been installed into the existing retaining wall in challenging conditions. All the anchors have been successfully installed to a depth of 12m.

The next stage was to carry out the shotcreting which was finished to an excellent standard, with a wood float finish. All that remained now was to remove the scaffolding and demobilise from site ready for the re-opening of the closed lane on the A59.

It was a tough project for everyone involved, however, we are proud to have been able to take on the challenge and successfully deliver a permanent working solution.