Condor Projects Ltd were awarded the contract to repair and stabilise Handley bridge and it’s four wing walls located a few miles outside Macclesfield. Due to the road being closed to traffic, Condor Projects Ltd had a limited timeframe of two weeks to complete the task. The works required were fourfold;

Due to time constraints, Condor sent two specialised teams to complete the corresponding jobs simultaneously. The first team were responsible for the soil nail installation while the second team took control of installing masonry anchors. 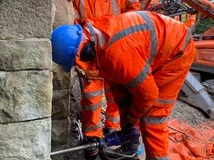 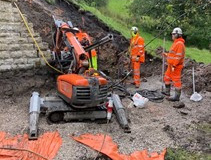 The soil nails were installed according to the engineer’s specifications at points in each of the four slopes to provide the maximum amount of stabilisation for the construction of the wing walls. A Husqvarna DXR which has been modified to carry a Marini CID 80 rock drill was used to install the anchors to a depth of 6m using an air flush system to make sure the drill head did not become blocked.

OPC grout was then pumped down the hollow R32 steel rods into the slope until the operatives saw a return of grout, thus showing that the bar and immediate area around it were saturated with grout. Once all the rods had been grouted and had been given time to harden, a steel mesh was affixed to the rods followed by all rods having plates and nuts securely fastened to allow the mesh a tight fit to the slope. All excess bar was cut off.

The masonry anchor installation was started by coring the length of the barrel underneath the bridge. Alternate voussoirs were cored into to a depth of 3.5m on the upstream face and 3m on the downstream face. The first 50mm of core was dry drilled and then saved so that they could be put back to preserve the natural look of the weathered stone. The rest of the depth was cored using a water flush to give a smooth hole. Once all holes had been cored, fibreglass anchors were inserted into the corresponding holes to give a cross stitch effect through the arch.

The fibreglass anchors then had a thixotropic grout injected down them until a return was observed, this process was continued until all anchors had been grouted. Special care was taken to make sure no grout stained the voussoirs around the core hole. The starting 50mm core was then placed back into the hole to give a natural look to the face.

Attention turned towards the bulge in the spandrel on the downstream face, to remedy this Condor Projects proposed installing a series of tranverse anchors through the spandrel to tie in the bridge and make it more secure. This was done by firstly having the main contractor dig up the roadway to the depth of where the bulge was, making sure to locate any services beforehand.

The spandrel was then cored on both sides of the bridge to allow a series of connecting R32 rods to be threaded through to each of their corresponding holes, connecting them together using steel couplers. Both ends of the now connected rods were plated and had nuts tightened on to them to in effect squeeze the bridge together reducing the strain on the spandrel. The plate and nuts were then painted to give a more aesthetic look to the bridge.

The bridge had, over the years started to have stones in its barrel begin to shift and crack. Condor Projects believed the best course of action was to install Helifix ties in to the barrel. The operatives focussed on any stones which had moved and on any cracks in the other stones.

The process of affixing Helifix was undertaken carefully as to not cause any unnecessary damage to the barrel, if operatives were repairing a crack, they would drill either side of the fissure allowing the two holes to intersect, a specially formulated resin would then be injected into both holes while the Helifix was carefully screwed in. The Helifix tie would be covered in the resin and allowed to harden. The process for the bricks that had shifted was similar apart from the aim was for the stone in question to be tied into its two neighbouring stones thus stopping any further movement.

Condor Projects Ltd finished all works set to them by the main contractor, Pronin, in a tight schedule and to a high level of workmanship.  Our expertise in bridge repairs means that Macclesfield and Whaley Bridge will have this crucial connecting road able to be used for many years to come.

It is always a pleasure working with Condor and this project was no exception. The team were professional, hard working and cordial at all times. Their work was to a high standard and accomplished in a short space of time. I am looking forward to the next time we are working together.