Condor Projects were approached to stabilise an embankment which used to be an old quarry in Stamford, Lincolnshire. The site had been proposed to be used for the building of luxury homes.

This particular project had certain difficulties presented to Condor Projects. A ground investigation had been performed and it was found that over half of the embankment had been constructed and as such was made-up ground which provided very little stability to the slope. Furthermore, a builders merchants yard is situated at the crest of the embankment which holds a significant tonnage of goods. 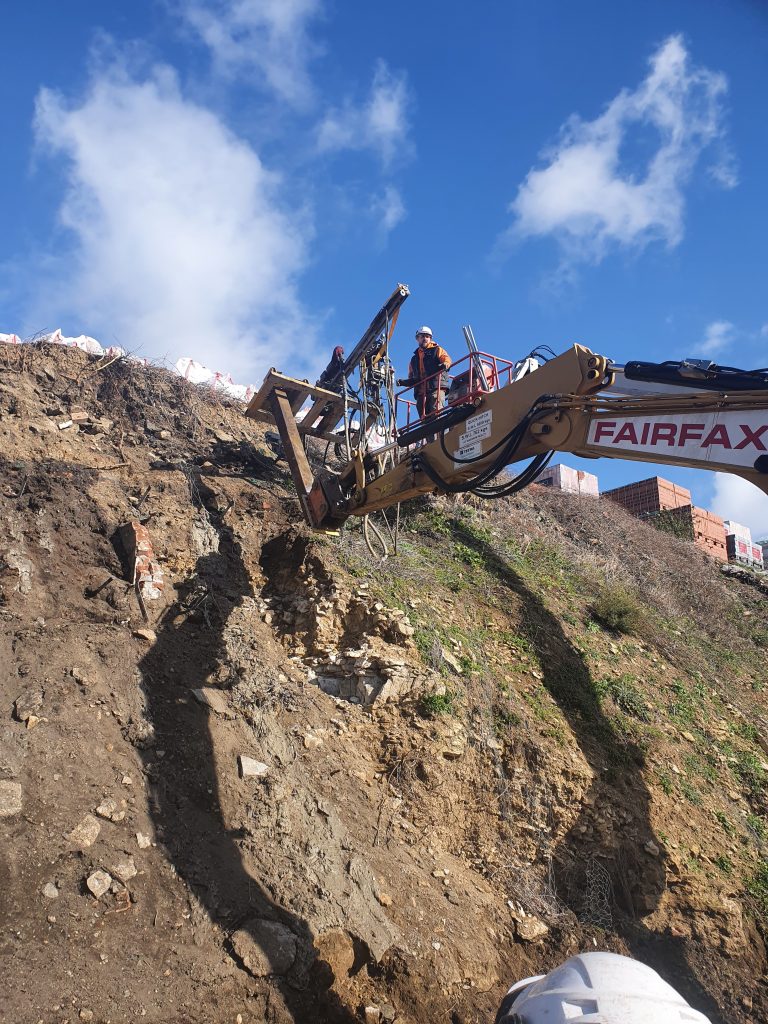 Secondly, due to the client wanting to erect a stone wall in front of the embankment for an aesthetic purpose, the embankment had to be shaped and cut away to allow enough room for said wall to be built including a ninety-degree cut at various levels along the embankment. Condor Projects, knowing the lack of stability that made up ground presents decided that a method of gradual anchoring and meshing would be the safest and most reliable way to complete the works.

It was therefore determined that the soil nailing had to be done in sections beginning at the top of the embankment. Once enough anchors had been installed the geotextile netting and rockfall mesh was affixed and secured. This then allowed Condor Projects to excavate the slope safely to the desired angle.

The slope had to be cut to ninety degrees to allow the wall space to be built giving a sheer face to the slope, therefore more rigid steel mesh was required to reinforce these parts of the embankment. Once the slope had been fully meshed and stabilised, the sections which were cut to ninety degrees had to be shotcreted to provide extra strength due to the severity of the angle.

The client desired a more aesthetically pleasing finish on the slope therefore Condor Projects recommended using hydroseed over the bank which would hide the steelwork and leave a meadow type finish after being allowed to grow for a few weeks.

Condor Projects is pleased to have completed another job using ingenuity and leaving all parties involved happy allowing for the client to carry on with building their luxury homes.